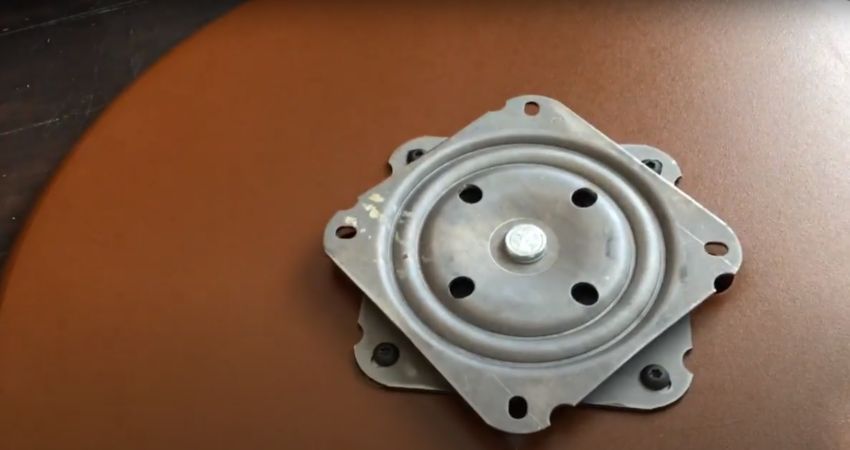 See how to install a La-Z-Boy swivel base to your recliner and still keep the normal rocking function as well.

How To Install a La-Z-Boy Swivel Base

Here we have a La-Z-Boy rocker recliner that has a rocking mechanism but it does not have a swivel base. We want to replace the rocking base with a swivel base. It’ll still be able to rock afterwards, but it will also be able to swivel.

Turn your recliner upside down

When you turn it upside down, you’ll see that there’s two places where you’ve got rocker springs and three screws attaching them to the rocker base, you’ve got to remove these screws. I’m using a Torx T25 size, which seems a little small, the T27 is a little big so I’m gonna go with the T25 and loosen these up here.

Detach the rocker base from rocker springs

So these springs are under a little bit of tension, so if you don’t prepare for it, when you unscrew them, you’ll find that it moves down about a quarter of an inch, which will make it hard to get back in afterwards. You just need some way to pry them back up. Alternately before you take out the screws, you can try to put something in there, find something that will hold it up. Now, when I take those screws out, it’ll keep it from coming down a quarter inch.

Now that we’ve got the rocker base detached from the springs, we can flip it over here, and you’ll see that there’s one more piece of the mechanism attached right here with two Torx screws, same size, we just got to remove those.

The frame the swivel base will attach to

So this here is the frame that the swivel base will ultimately attach to, and what you want to look for is the side where this is drilled.

Those pre-drilled holes where we’re gonna attach that mechanism that we just detached. So as you can see, there are four screw holes here to attach this, we only need two, so you can put it in two different positions. This particular chair, you can’t really get to the further screw holes without causing this lever to bump the wood, so I’m going to go ahead and put them in the screw holes back here.

Okay, so now we’ve got that mechanism attached securely, so I’m gonna go ahead and flip this back over, and it’s gonna come alongside the springs here. That’s the next thing we wanna attach. So just a warning, if you’re gonna put something in here to hold it up, if it’s more than about six to seven inches long, it’s gonna bump this cross-beam here and make it a lot harder to get the holes lined up, although they’re almost in the right place. Almost is not close enough.

And so I’m gonna have to play with this a little bit. If you didn’t put anything under here to keep the springs under tension while you change the base, you’re gonna need to pry them up a bit. So what I’ve done is I’ve taken a small set of pliers and kind of gone in here and twisted until I got the springs up.

Lining the holes up

Once you’ve done that, you should be able to move the wooden base itself and get these holes lined up, as you can see, there is the hole in there, and I wanna line it up with the centre hole here, so you just do one side and then after that one’s in, I’m gonna come around and do the same thing on either side with the pliers. After the two ends are in, you can come in and do the centre one. So with a little bit of wiggling around the base and the pliers, I was able to get this lined up well enough so I could start the screw and once it’s in there, you can turn it pretty easily and tighten it right up.

So you can see I got that front screw in and the rear screw is not lined up at all, it’s a little tighter to get the pliers in back here ’cause of this triangular support, but you can go underneath, you can get your pliers in there and push that spring up until that also can be aligned to the screw hole.

Once the pliers are in a good spot there, you should be able to lean down on this here and bring that other screw hole into position.

Attaching the swivel base to the frame

There it is, there we go. Now that we’ve got both sides screwed on tightly, it’s time for us to put the actual swivel onto this new frame, and that’s gonna use these four holes there. Here’s the base itself and we’re gonna be attaching this right there. One thing to note is that, to do so we’re gonna work through these holes that they’ve provided, and then turn it 90 degrees and so put in these two first and put in those two.

Another thing to note is that they include some extra hardware here that you may need this on your recliner, on my recliner I did not need these spacers, these plastic spacers here, there are four of them, I don’t need them. There were two long screws and they were these two little bolts at the end, there’s no place for that on my recliner. I’m gonna be using just these four bolts, I’m also going to use these plastic little washers that were provided, they are adhesive, so you can see if you peel off this cover and then attach them just like that. So I’ll do four of those. The bolt that I’m gonna put through, the threads are actually inside the wood here, they’re already integrated, so we just screw right into that.

Okay, so I’m putting the swivel on there, it’s not attached yet. If you can see in there, I’ve got a hole and then I have to line it up right there and put this down on top of that same hole, that’s where the screw is gonna go. So once you got that lined up, you are going to put in one of these T30 screws using my T30 sized Torx head and it’s gonna go right in there.

Okay, now I’ve got the screw here and here are both in and tightened out a little bit, but not much. The whole thing can still move. I’m gonna rotate this until I see it line up with the other holes, and now I can put in the screws for those. Once you’ve tightened those four screws, you can feel this, it’s a firm, but it should rotate pretty freely.

The recliner now swivels and rocks

There is the finished recliner back on its feet, or I should say foot and I will take its first spin. If I sit down here, as you can see it rocks as it always did, but now it also swivels, that is the new feature. That’s it. I hope this has been helpful, and I hope you’re able to enjoy a spin in your new La-Z-Boy.

Check out this 600mm recliner swivel base. See all our recliner chair replacement parts, which are available to buy online.